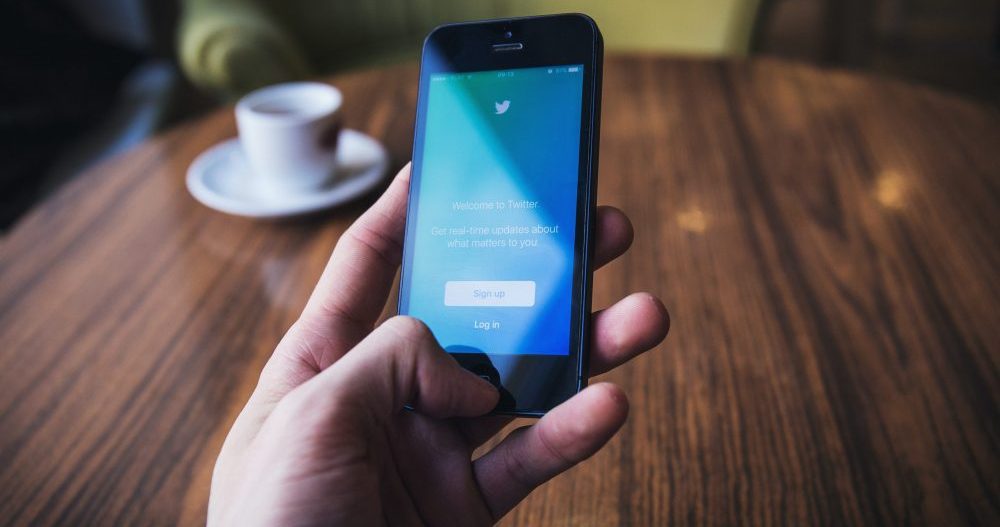 Twitter began as (and, arguably, still is) a social media app to connect virtually with others, share thoughts, and have conversations.

These days, it’s become a platform where users get breaking news, make jokes, post memes, and fire off random thoughts as well.

Twitter is also one of the top platforms for social media marketing ads.

If you’re running Facebook and Instagram ads, you may feel like you’re set when it comes to paid social. But if you haven’t even thought about adding Twitter ads into the mix, you may be missing out.

In fact, Twitter user numbers — and engagement rates — are growing. Whether you’re already aboard the Twitter Ads campaign train or just want to know more, let’s dive into the info you need to succeed on Twitter in 2022.

Twitter Ads are paid tweets featuring text or multimedia. They show up on the Twitter platform as Promoted Ads, Follower Ads, and Trend Takeover via desktop or on the mobile app.

You can usually interact with these tweets the same way you would an organic tweet (such as responding, retweeting, or liking), but they’ll be marked as “promoted.”

People spend 26% more time looking at ads on Twitter than they do on any other social media platform.

Not only that, but reports show the platform has approximately 206 million daily users across the globe. When these users are scrolling, some of the tweets in their timelines may be sponsored ads or promoted content.

Your target audience may very well be active on the Twitter platform. According to Statista, men between 25 and 34 years of age are the largest Twitter age demographic (19%).

The second-largest is 18- to 24-year-old women. However, Twitter users are hardly all young. More than 17% of them are ages 50 and up. 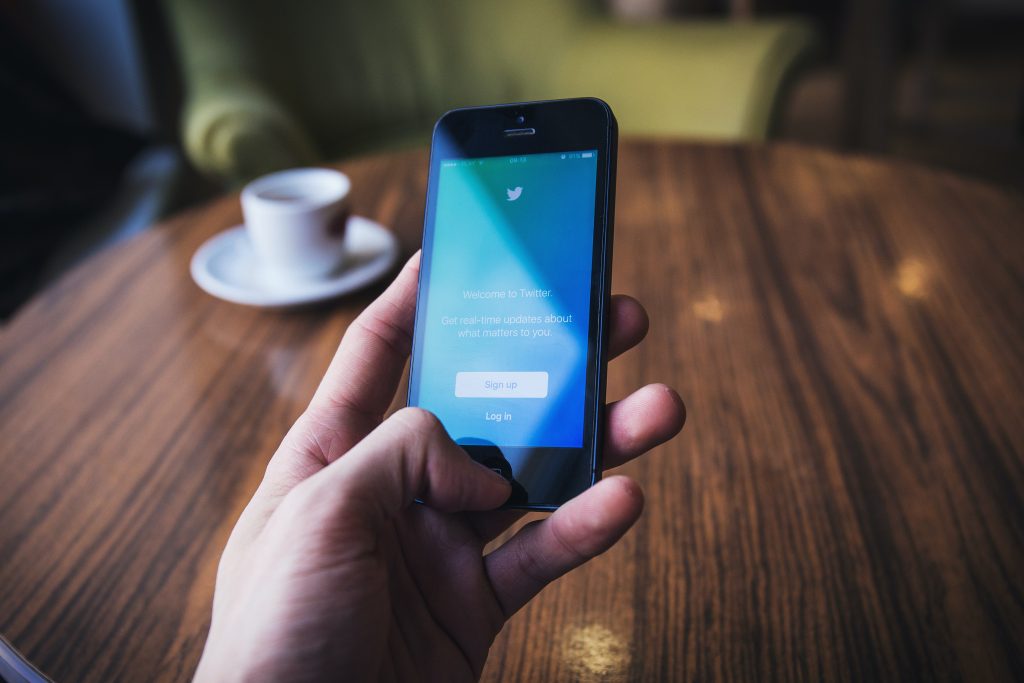 When your Twitter Ads campaign parameters are standard, the platform evens out your spend rate throughout the day. (Image via Unsplash)

A few key benefits of Twitter Ads are that they’re:

One of the best parts about Twitter Ads is that there’s no minimum campaign spend. Thus, they can be suited to virtually any budget.

Twitter determines which audience your content is most suitable for. After that, the ads compete in an auction based on your budget.

The more money you’re willing to pay and the more relevant your ads are, the more likely they are to appear where you want.

These ads appear in the user’s timeline and look like any other tweet except for the “promoted” tag on the bottom. They come in several formats:

It’s also key to pay special attention to the specs of each format to ensure the highest quality of your ads. For example, you can add around 100 tweets to a Moment (curated stories), but the platform recommends fewer than 10.

These ads show up in different locations on the platform, including the timeline, “Who to follow” section, and search results. They display your account to people who may find it relevant and interesting.

This option allows you to pair your ads with premium video content from vetted publishers. In March 2021, advertisers gained access to some new Amplify options:

You can also take advantage of the Amplify Sponsorships program which allows pairing with a single publisher for the duration of your campaign. According to Twitter, this option is currently unavailable to self-serve advertisers.

This advanced approach to Twitter advertising allows you to create an immersive experience for the user. Your options for this ad type are:

The cost of Twitter Ads varies dramatically based on the industry, format, audience, and goals. The least expensive ads are generally the standard promoted ads. However, advanced options like Takeover are often more effective.

Constructing a versatile Twitter Ads campaign can take time and practice. These are the latest tips to help your ads succeed in 2022.

The feature allows you to place your ad at the very top of the “Explore” tab (for the first two visits per person per day), improving its visibility substantially. The option supports static messages as well as 6-second GIFs and videos.

When your Twitter Ads campaign parameters are standard, the platform evens out your spend rate throughout the day. So, if your daily campaign budget is $100, it’ll be distributed more or less evenly within 24 hours (approximately $4 per hour).

To speed up your campaign and achieve faster results, you can turn the standard delivery option off. When you do that, Twitter will start serving impressions and generating engagement as fast as possible until the daily budget is up.

This is a perfect option for time-sensitive advertising campaigns that need to achieve high engagement during a certain timeframe.

Twitter cards appeared back when the character limit was 140 and companies were desperately wishing for more ad space. Since tweets with images often see an increase in leads, these cards are still trending.

When you post a link, Twitter automatically pulls the featured image from the page you’ve linked to and includes that image in your visual tweet, also known as your Twitter card. If there’s no established image, the card may be blank. 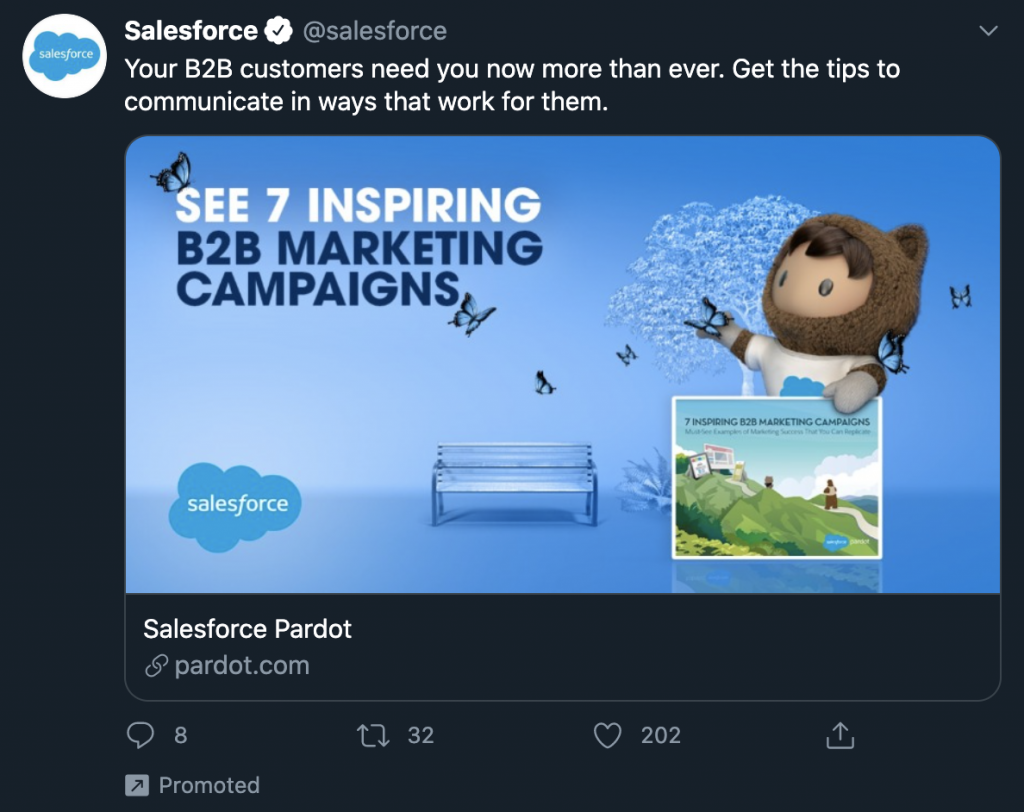 If you want to make a bigger impression with the cards:

Pro tip: Don’t forget to take advantage of the multi-image card option if it’ll improve your ad. This lets you post up to four images in one tweet, which expand when the user clicks on them.

Video content continues to gain momentum on Twitter and beyond. Create a video views campaign to take full advantage of this media and make your ads more appealing.

These campaigns allow you to display your video in-feed and improve your engagement.

Here are the details for creating Twitter video views campaign:

Ready to run a successful Twitter Ads campaign? We can help.

Retargeting features (also called remarketing) can help Twitter Ads stand out from other paid social media advertising options. You can use this feature on Twitter by setting the campaign to retarget those who:

6. Be strategic with hashtags

Adding hashtags to your Twitter ad copy can have a significant impact on your campaign.

When using hashtags, aim to follow best practices, such as:

The right hashtag could drive the potential customer to click your ad just as well as pairing with a publisher would without costing you a penny. Keep in mind that a hashtag is part of the character count.

Paid social ads, like all digital marketing campaigns, need regular testing and optimization to perform at their best. You can run a variety of Twitter ads, then analyze how well they work for your target audience and the platform after a significant period of time.

Experiment with elements like colors, multimedia, and text to see what provides top results. Designing several ads doesn’t just give you an opportunity to improve your campaign, but it also helps hold your audience’s attention.

Running the same ads over and over again can annoy potential and existing customers. That’s why it’s a good idea to rotate your most successful pieces.

Twitter Ads can be a successful paid social avenue for a variety of brands and industries. These ad types give you an avenue for reaching your target audience in a seamless, creative way.

Plus, with ever-changing social media trends, this is also an opportunity for you to have fun and create eye-catching, witty ads that garner double-takes.

By keeping tabs on the latest developments, trends, and offerings, you can continue to improve your Twitter campaigns — and increase ROI as a result.

This article has been updated and was originally published in June 2020.

Sam Yadegar is the co-founder and CEO of HawkSEM. Starting out as a software engineer, his penchant for solving problems quickly led him to the digital marketing world, where he has been helping clients for over 12 years. He loves doing everything he can to help brands "crush it" through ROI-driven digital marketing programs. He's also a fan of basketball and spending time with his family. 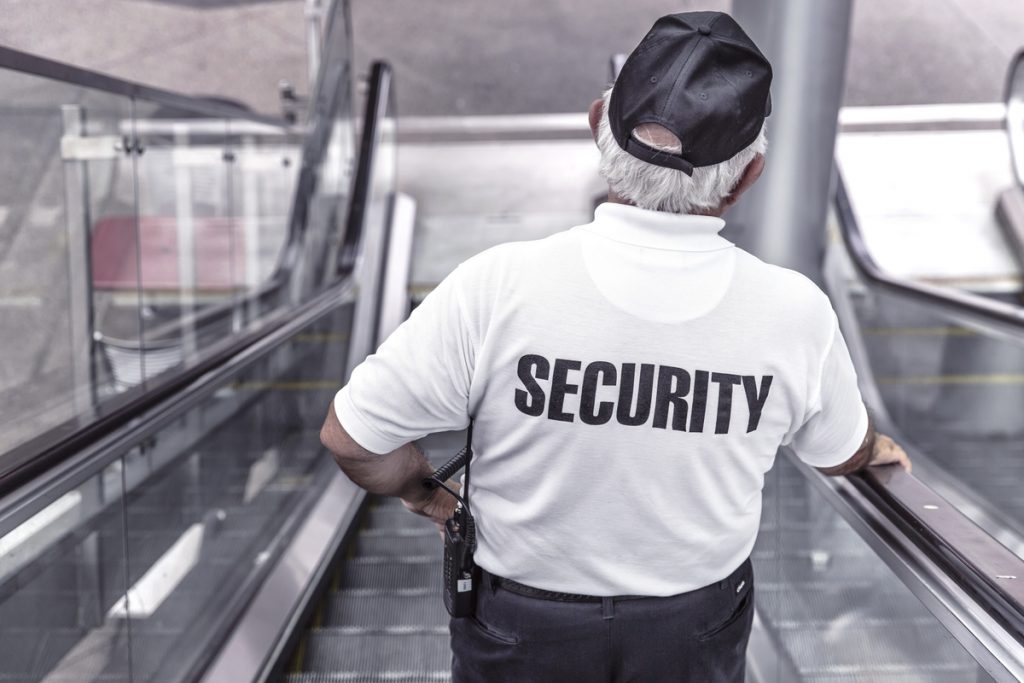 Getting Started with Security Services Marketing 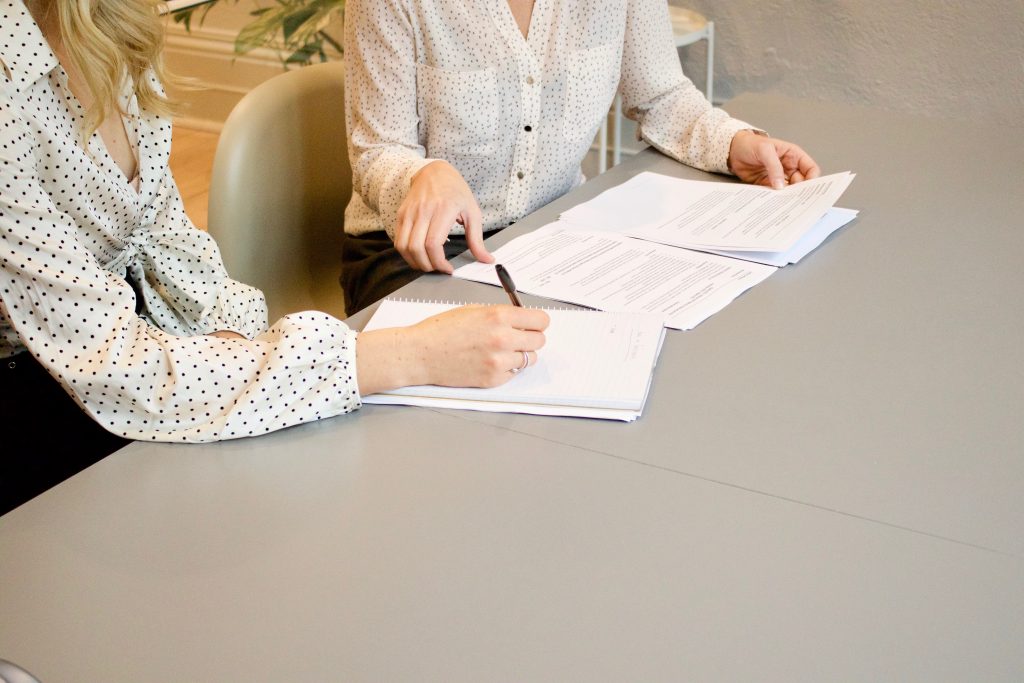 From double-counting conversions to ignoring organic data, these are the most common marketing reporting errors we see -- and how you can avoid them.... 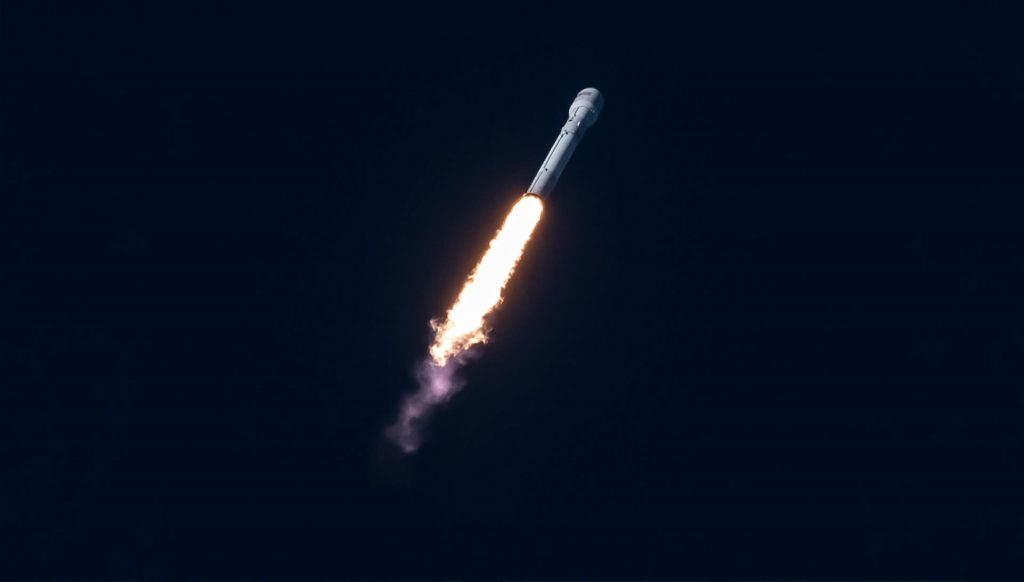 From a consistent message to mobile-friendly design, keep these tips in mind to ensure you're getting the landing page conversions you deserve....

This website uses cookies to improve your experience while you navigate through the website. Out of these, the cookies that are categorized as necessary are stored on your browser as they are essential for the working of basic functionalities of the website. We also use third-party cookies that help us analyze and understand how you use this website. These cookies will be stored in your browser only with your consent. You also have the option to opt-out of these cookies. But opting out of some of these cookies may affect your browsing experience.
Necessary Always Enabled
Necessary cookies are absolutely essential for the website to function properly. These cookies ensure basic functionalities and security features of the website, anonymously.
Functional
Functional cookies help to perform certain functionalities like sharing the content of the website on social media platforms, collect feedbacks, and other third-party features.
Performance
Performance cookies are used to understand and analyze the key performance indexes of the website which helps in delivering a better user experience for the visitors.
Analytics
Analytical cookies are used to understand how visitors interact with the website. These cookies help provide information on metrics the number of visitors, bounce rate, traffic source, etc.
Advertisement
Advertisement cookies are used to provide visitors with relevant ads and marketing campaigns. These cookies track visitors across websites and collect information to provide customized ads.
Others
Other uncategorized cookies are those that are being analyzed and have not been classified into a category as yet.
SAVE & ACCEPT